Harvey Weinstein was sentenced to 23 years in prison for third-degree rape (CA Penal Code 261) https://leginfo.legislature.ca.gov/faces/codes_displaySection.xhtml?sectionNum=261.&lawCode=PEN and sexual assault  in the first degree (CA Penal Code 243) https://leginfo.legislature.ca.gov/faces/codes_displaySection.xhtml?sectionNum=243.4.&lawCode=PEN. Weinstein, who has been accused of violating multiple women, was convicted of raping a woman in a New York City hotel room in 2013 and forcibly performing oral sex on another woman (CA Penal Code section at his apartment in 2006. He faced from 5 years up to 29 years in prison. He was sentenced to 20 years for criminal sexual act in the first degree and three years for rape in the third degree to be served consecutively. He was also sentenced to 10 years of post-release supervision for both charges.

The women, who were also in the entertainment industry, whose names have not been disclosed due to privacy matters never thought they would see the day Weinstein would face repercussions for his actions. Weinstein's attorney attempted to get more lenient terms for sentencing, due to his fragile health and age but these efforts failed.

The 67-year-old former film industry titan has denied all allegations of nonconsensual sex and pleaded not guilty. His lawyers have said they will appeal the conviction. 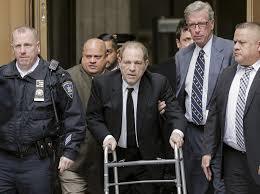 More than 80 women have come out with accusations against Weinstein. He still faces charges in California. These allegations started the #MeToo movement https://metoomvmt.org/ which was an effort for women to come out as survivors of sexual violence by breaking their silence.

If you or someone you know, is facing charges of sexual assault or rape contact the Law Offices of Seth Chazin to assist.