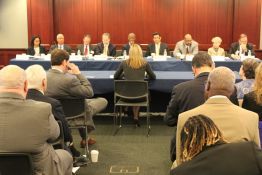 The Charles Colson Task Force on Federal Corrections believes that the Justice Department should limit the cases it brings to court and steer nonviolent crimes towards probation, instead of prison. Doing so would save more than $5 billion dollars.

These suggestions came after national discussion across the federal government about overhauling the country's criminal justice system, because critics say it is overly expensive and has resulted in long sentences for nonviolent drug offenders. Republicans and Democrats still have not agreed upon a plan to cut the prison population in Congress, though the White House and Justice Department have encouraged changes in how suspects are prosecuted and sentenced at the federal level.

The recommendations made by the Charles Colson Task Force on Federal Corrections offers tangible steps prosecutors, judges, prison officials and policymakers can take to reduce prison overcrowding. The recommendations also provide ways in which it would reduce spending on a corrections system that has expanded in the last 30 years due to harsh mandatory minimum sentences imposed on drug crimes.

The task force consists of nine members, many of whom are judges, previous members of the House of Representatives, and have worked in the field of corrections, which was created by Congress in 2014. They believe that the criminal justice system is in a crisis and if just six of their recommendations were carried out, the federal prison population could drop by 60,000 by the year 2024. In order to reduce the population significantly, the task force recommends that prisons be used sparingly as a punishment and for prosecutors and judges to avoid a “one-size-fits-all” approach.

The proposal calls for Congress to repeal mandatory minimum penalties for drug offenses—except for drug kingpins. Judges should also have more discretion by imposing shorter sentences, including probation and drug court instead of prison for nonviolent crimes. The taskforce placed blame on drug mandatory minimum sentences for narcotic offenses, which became popular during the 1980s and typically dictated harsh punishments based on drug quantity, this in turn increased the prison population significantly. Half of the inmates in federal prisons are there for drug crimes, yet an estimated 80 percent of those in prison for drug crimes have no serious history of violence, and more than half had no history of violence whatsoever.

It is time for major reform of the federal prison system and the federal criminal justice system as a whole.