An SFDP police officer tried to subdue a mentally ill unarmed man with baton blows, before shooting in a heated confrontation. The video footage was released by Public Defender, Jeff Adachi. 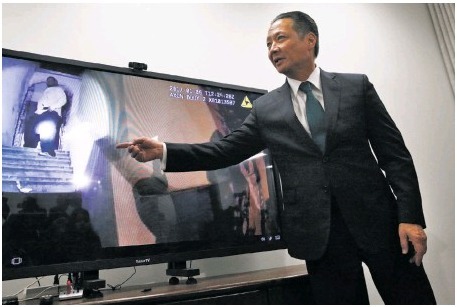 Jeff said the baton strikes were among actions that defied a high-profile push to get city police to focus on de-escalating potentially dangerous situations. But police officials said the officers, whose actions are under investigation, appeared to use “great restraint” in handling the encounter.

It was the first time a body-worn camera captures a shooting since San Francisco gave officers the Taser Axon cameras last year. The police declined to release the video, by claiming it might taint the investigation. But following SF Public Defender's news conference, they released footage from devices of both officers and claimed they intended to release it.

Two officers responded to reports of a restraining-order violation, ends up with Officer Kenneth firing at Sean Moore twice, after his Partner, Officer Colin was knocked to the ground while he failed to subdue Moore with baton strikes. A photo of Patino was released by Police with his face bloodied due to the blow to the nose. Moore was shot twice while he was appearing to move towards Cha, and was charged by city prosecutors with making criminal threats, assaulting a peace officer, resisting arrest, and other charges.

Police officials have said Moore punched Patino when he struck him with the baton and that he was shot when he advanced on Cha.

Since the fatal shooting of Mario Woods in the Bayview neighborhood, which was captured on video by witnesses, the police have been under pressure. Due to this, the Police Commission revised the use-of-force policy for the Police Department for the first time since 1995, emphasizing more on de-escalation.

Sean Moore's mother, Cleo Moore, said he had been moved recently from the hospital to jail.

“My son is not a very vicious person, he's just struggling everyday with mental illness,” she said Wednesday. “It's unfortunate that it happened this way. My son did not need to be shot ... It didn't have to happen this way if the officers would have been trained in how to take care of mentally ill patients.” Adachi added: “the video shows the officers escalating the situation by aggressively dealing with an already agitated man.”

“If you look at basic deescalation 101, you talk to the person, you try and get the person in a place where they are calmer, and if the person is making reasonable requests — in this case for the officers to step off his stairs — they could have done that without endangering themselves or Mr. Moore,” Adachi said. “There's obviously a big gap between what the officers are being told at the academy and what is being done at the street.”

Another incident also recently occurred in Southern California, where in 2015, police were called by a convenience store clerk who reported a possible burglary in process, according to the Los Angeles Times. In a police report, Fontana officers said James Hall was "armed with a knife," though it is difficult to determine if Moore was carrying a knife based on the muted, grainy surveillance video.

Several Fontana cops and a police dog arrived on the scene. Many of the cops walked into the store with firearms and stun guns drawn. Police soon fired in James Hall's direction and released the dog, according to a state civil rights and wrongful-death lawsuit filed by James Hall's family.

Persons with mental illness are 16 times more likely to be killed during police encounters than other civilians, according to a study released in December 2015. An investigation by the Washington Post released halfway through 2015 found that 123 of the 461 fatal police shootings that had occurred by that point in the year involved mentally or emotionally unstable individuals

If you have been arrested in Oakland or the San Francisco Bay Area, contact our office at 1-800-242-1514 or contact us online. Our consultations are always free and entirely confidential.