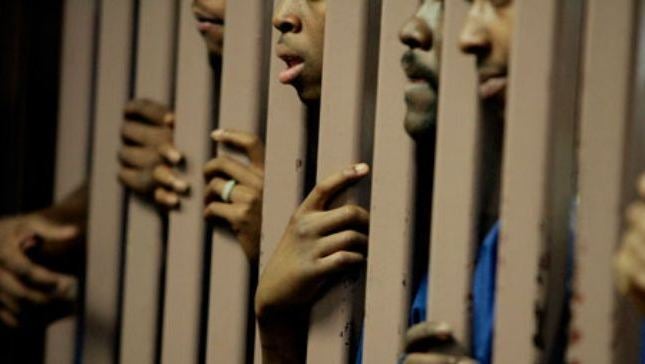 US Mass Incarceration: Social and Economic Disaster That is Totally Out-of-Control

For more than 10 years, researchers have been studying the widespread societal and economic effects caused by the United States' 40 year “experiment” with incarcerating mass numbers of its citizens. There is overwhelming evidence supporting the argument that the crisis of mass incarceration threatens society as a whole. Those who study the problem have called for an immediate solution to this problem Recent reports have compiled some of the most comprehensive and compelling proof yet that the United States “has gone past the point where the numbers of people in prison can be justified by social benefits,” and that mass incarceration itself is “a source of injustice.” This is the main conclusion of a two-year, 444- page study prepared by the National Academy of Sciences at the request of the Justice Department and others. The report indicates many well-known statistics: Since the 1970's, the United States' prison population has quadrupled to 2.2 million, making it the world's largest. That is 5 to 10 times the incarceration rate in other democratic countries. The statistics only get worse. More than half of the people incarcerated in state prisons are there on charges for nonviolent crimes, and one out of every nine, roughly about 159,000 men and women, are serving life sentences—many without the possibility of parole.One of the major reasons that the incarceration rate has increased is the increase in the length of sentences as a whole. Sentences are much harsher, for less and less serious crimes. These harsher sentences were established in the 1960's. However, the length of sentences continued to rise unchecked for the next 50 years. Some of these harsher sentences include lengthy mandatory minimum sentences for nonviolent drug offenses as well as “three strikes” sentences that have put people away for life for committing crimes as minor as stealing toilet paper, candy or cigarettes from a convenience store.

One major cause of mass incarceration is that many politicians fear that they will appear as being “soft on crime,” even though there is the evidence indicates that mass imprisonment has had minimal impact on the reduction of crime as a whole. Human Rights Watch has reported that prison should generally be a last resort, yet “it has been treated as the medicine that cures all ills,” and that “in its embrace of incarceration, the country seems to have forgotten just how severe a punishment is.” (For more information, see ~ Human Rights Watch PDF: US Nation Behind Bars and Human Rights Watch News 05/06/14: US Nation Behind Bars)

The problem with the increase in the severity of sentences has been revealed in the devastation brought upon America's poorest and least educated families, destroying neighborhoods and family ties. From 1980 to 2000, the number of children with father's in prison rose from 350,000 to 2.1 million. Since race and poverty play a significant part in who is being incarcerated, the weight of mass incarceration has been placed most heavily on communities of color, especially on young African-American men. This has become a vicious cycle for these young men as, after their release, these men are sent back into the poor communities from which they came and are often confronted with the hopeless situation of not being able to get a job or public benefits such as subsidized housing due to having a criminal record. This in turn drastically increases the likelihood of re-offense.

Mass incarceration has had a significant impact on the United States economy. A report from the Brookings Institution’s Hamilton Project concluded that $80 billion a year is spent on direct corrections expenses alone, and more than one quarter of a trillion dollars per year is spent when also factoring in police, judicial, and legal services. There are many alternative solutions that can be employed in lieu of spending trillions of dollars on incarceration.

What the United States needs to do is, first and foremost, use alternatives to imprisonment such as diversion programs, rehabilitation programs and other alternative means to solving the problem of crime. Beyond alternatives to incarceration, we also need to reduce the length of sentences, provide more opportunities for rehabilitation within prison, and remove other obstacles that inhibit ex-prisoners from reentering society in a productive way once they are released. Another idea that has been used is rating prisons on their effectiveness with regard to recidivism of former inmates. Mass incarceration has had a negative impact on our society from both an economic as well as an overall societal perspective. In fact, this has become a societal disaster that needs to be remedied immediately. The government needs to do all that it can to reduce harsh sentences and end mass incarceration so we can expend our resources in more important areas such as our educational system and expanding our economy and our global position in science and technology.

Excellent article! Mass incarceration is a blot on our criminal justice system and our democracy.As a nation we should be ashamed to have allowed this to have happened. Keep up the good fight by defending the accused and trying to keep them from being incarcerated. I aso agree with the effort to abolish the death penalty, which results in mass incarceration and is a form of cruel and unusual (inhumane) punishment. A senior citizen.